This is a shot at a spreadsheet where I have enumerated all the functions in the Python code of netsukuku. Those marked green have been ported to the Vala version, the red ones are still to-do.
I thought to share that bit of info, so you can have a vague idea of the progress with this task. 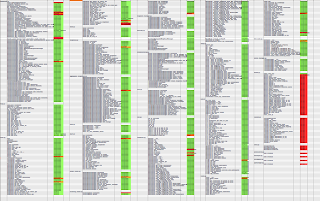 The bottom part of the list (the red pile) contains functions that implement ANDNA and the DNS wrapper. These aspects are vital for end users; but they are not essential in order to conduct preliminary tests on the routing engine. Therefore I think that after a few more code I will be able to stress test the netsukuku daemon in Vala.

In the meantime I have isolated the part of the code that handles the RPC mechanism of the program. That is what make possible for the nodes to communicate and interact with their direct neighbours. I packaged this code in a library; by using it one can create useful tools for monitoring the network. As an example I made a graphical utility that shows the neighbours that run netsukuku. 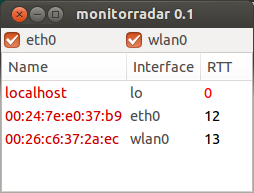