I just released a new version of netsukuku (0.9.1) that fixes a major bug. In version 0.9 the dns-to-andna redirector was working perfectly on a PC with Ubuntu, but it did not work at all on a router with OpenWrt.

I take advantage of this new release to try and see what are the necessary steps to deploy a router in the following scenario.
Those who follow my blog know that in my house, I prepared a simple cabling. There is a room in which a number of cables arrive. Among these, one comes from the roof (where my WISP provider has installed an antenna of their property), one comes from the garage (where I have placed a server) and one comes from the living-room.
In that room is a simple non-configurable hub where all the cables are attached.
I have a router that has a wireless interface and an internal configurable switch which is usually configured to have one WAN port and four LAN ports. A classic tp-link 1043 to be exact. I want to put this router in the living-room to be able to connect with several devices to the Internet.
Let's see how to configure this router to meet these needs and start building at the same time a Netsukuku network.

First, I have built the OpenWrt firmware according to the instructions linked in my previous post. I also included the package for the web commands interface (luci). I flashed the router with the firmware.

I connected one of the LAN ports of the router to the network port of my PC, logged in via web interface to the default URL for a fresh install of OpenWrt (http://192.168.1.1) and set a password for root.

Once that I applied the setting, I had to redo the connection of the network interface on my PC and direct the browser to the new URL (http://192.168.3.1)

Then, I enabled the Wifi interface.
The second change that I want to make is about the bridge that is enabled by default in the installation of OpenWrt between the wifi interface and the ports marked as LAN.
For now, I do not foresee to connect any other device to the LAN ports of this router. But even if this were to happen in the future, I want to give to Netsukuku the duty to route the packets received via wifi to the local wired network when necessary. So I want to remove this bridge.

We can see through the OpenWrt web interface how the bridge is made.
To start, the switch inside the device is configured to use the protocol VLAN. The VLAN 2 is composed of just the port 0 of the switch (marked as WAN port in the case). VLAN 1 is composed of the other 4 ports (marked as 1 .. 4 in the case). Both the packets that belong to one VLAN or the other will get to the router's CPU and they'll be "tagged".
So the bridge between the LAN ports and the WiFi is actually a bridge between the eth0.1 interface and the wireless interface, as seen in the "physical settings" page shown below. The name "eth0.1" does not indicate a port other than eth0, rather it is a notation used by Linux to indicate a VLAN. As if we say to the CPU: "packets read and written in the eth0 interface are formatted according to the protocol VLAN; grab only those that belong to VLAN 1."
In the "physical settings" page I disable the bridge and I select only the interface "eth0.1".
At this point the wireless physical interface is not associated to any logical interface. I create a new logical interface named WIFI.

Now the router has 3 logical interfaces: LAN, WIFI and WAN. I did not make any changes to the WAN interface, which has protocol DHCP and is associated to the physical interface eth0.2 as shown below.

Now I make two changes to the configuration of the firewall included in OpenWrt.
First, optional, I include the new interface WIFI in the "lan" zone of the firewall.

For the second, crucial, I add some rules to the firewall to prevent it from blocking important packets.
With the first rule I tell him to accept incoming packets from the "wan" zone destined for port 269 (both TCP and UDP) on the router itself. These packets implement the routing protocol of Netsukuku. I named this rule "Allow-netsukuku."
With the second rule I tell him to accept forwarding any packet to or from any zone if the addresses of the source and destination are in the class IPv4 10.0.0.0/8. That is, I allow network traffic to pass through me. I named this rule "Allow-netsukuku-traffic."
These rules are necessary if other Netsukuku nodes (eg my server in the garage) must be connected to the WAN port of the router.

At this point I was pretty happy with the setup, it seemed a good time to save a backup.
The backup archive which can be generated from the OpenWrt web interface is composed of a series of system configuration files that reside in /etc. By watching those files one can understand how to get the same results even when a firmware doesn't includ the package of the web interface (luci).

I logged in to the router via SSH and I followed the instructions linked in my previous post. That is, I modified configuration files (nsswitch.conf, dnsmasq.conf, ...) and I restarted the services dnsmasq and dns-to-andna.
Finally I started the daemon ntkd and I told him to listen on interfaces wlan0 and eth0.2.


In my Ubuntu server (whose hostname is nodo07) ntkd was already up and I had installed a web server.
So I connected my Android phone with the wireless network 'ntkd'. With the browser of the phone I am able to visit the website of my server and navigate on the Internet websites, such as Wikipedia. Then I repeated the same test with the same results, as expected, from a Windows laptop. 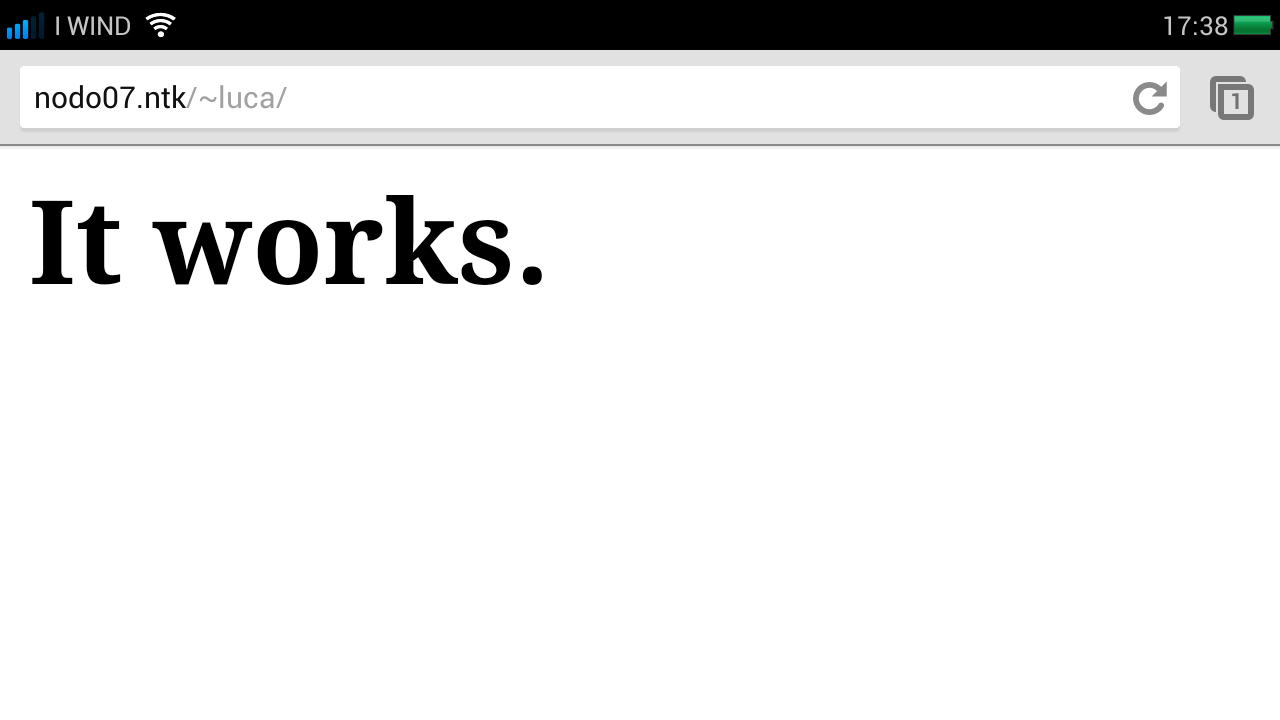 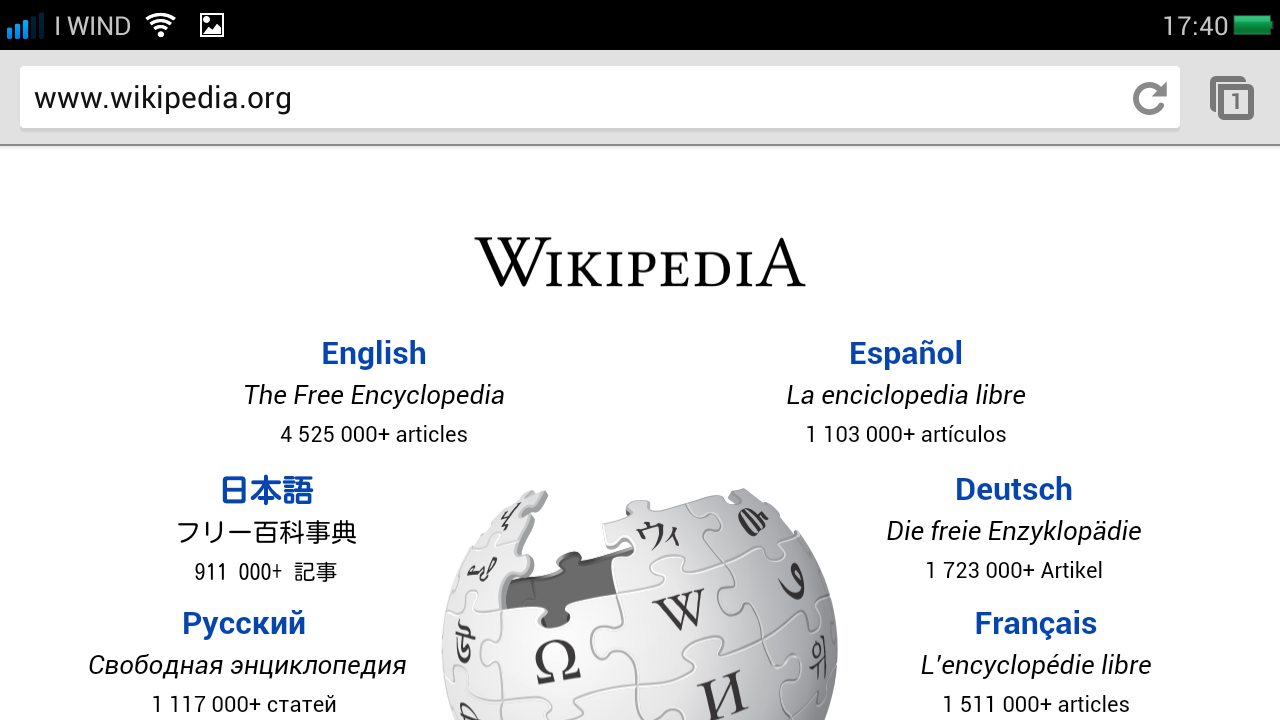